HÀ NỘI — Developing a business related to the environment is not usually the first option for most start-ups due to the lack of profit. However, Trần Thị Thoa decided to take a risk.

HÀ NỘI — Developing a business related to the environment is not usually the first option for most start-ups due to the lack of profit. However, Trần Thị Thoa decided to take a risk.

Obsessed by environmental issues, particularly waste treatment which has become an urgent issue in Việt Nam, Thoa and her friend decided to set up mGreen in 2017 as a social enterprise providing digital technology solutions to help better manage waste classification, collection and treatment.

“Everyone knows that waste classification is needed to minimise the impacts on the environment. Many countries have done it successfully, so why shouldn't urban areas in Việt Nam do the same,” she said.

A report by the Ministry of Environment and Natural Resources found that the total volume of solid waste in Việt Nam reaches about 28.5 million tonnes a year, including 19 million tonnes from domestic waste. In Hà Nội, the figure is 7,000 tonnes a day, while it is nearly 10,000 tonnes in HCM City.

Around 85 per cent of the waste is buried or burnt, causing serious environmental pollution. Meanwhile, around the world, between 60-90 per cent of waste is recycled.

Experts repeatedly mention the importance of sorting waste at source, as 50-70 per cent of waste contains compounds which can be recycled to create new sources of energy. Waste classification at source would also help to reduce waste treatment costs.

Thoa’s company was founded with the aim of encouraging waste classification and collection at source using smartphones, and she believed the model could succeed as the application of technology would help to facilitate waste sorting and collection.

The digital solution mGreen has provided is the use of a mobile application for sorting and collecting recycled waste as well as reward system, according to CEO Thoa.

Each household is provided with free dustbins for recycled waste and loyalty cards when they join the programme.

“Members are given careful instructions on how to classify the waste. When their dustbins are full, they just need open the mGreen app on their smartphones and call our waste collectors,” Thoa said.

The waste is transported to junk shops or recycling factories that buy recyclable waste for treatment.

“People receive points depending on the amount of waste that can be redeemed for goods and services such as entertainment and dining,” she said.

Nguyễn Thị Trà My, a resident of Hà Đông District, who lives in one of the first buildings that mGreen trialled the project, said the app provided a good solution to better protect the environment.

“I have been registered with mGreen for nearly a year and find it really effective and easy,” she said.

“I can now easily classify waste at home and just wait for the collectors to take it away,” she added.

“Many residents in my building use the app. It requires at least the participation of 60 households per building to implement the programme,” My said.

Apart from raising public awareness of waste sorting, mGreen is also aimed at creating jobs and a better working environment for waste collectors who are considered among the vulnerable groups of workers in society, Thoa said.

However, the road was not as smooth as Thảo had imagined.

“At first, it was not easy to get residents to use the app because most Vietnamese people are not in the habit of sorting their waste,” she said.

Capital shortage is the biggest challenge, she said. The project chiefly depends on funds from individuals, organisations and businesses.

The lack of space for processing the waste after it's collected also needs to be handled, she said.

The project, however, has yielded positive results. It has so far encouraged the involvement of nearly 3,000 households and 2,000 pupils and teachers in Hà Nội and HCM City.

Starting operations in May 2018, mGreen helped to classify and collect three tonnes of recyclable waste that year.

The company plans to co-ordinate with the Hồ Chí Minh Communist Youth Union Central Committee to implement waste classification models to other localities next year after it has been successfully deployed on a trial basis in Hà Nội and HCM City. 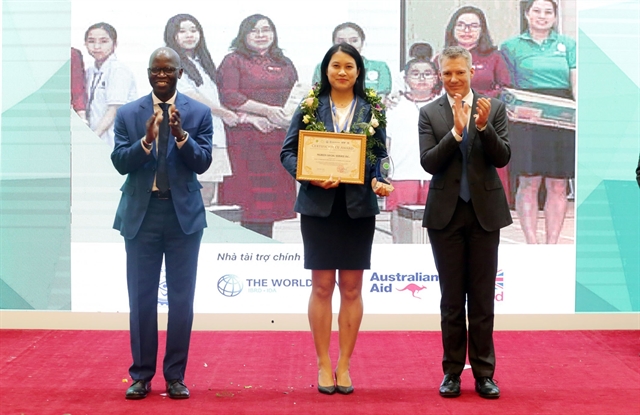 Trần Thị Thoa, co-founder of mGreen, is awarded the second prize at the Start-up and Innovative Competition with the theme “Women and the future of the green economy”, which was launched by the Ministry of Science and Technology, World Bank and the Việt Nam Women’s Union in June. — VNA/VNS Photo Anh Tuấn

The project was named among the top three creative and innovative technology projects in Hà Nội and in the top five at Start-up Journey 2017.

In June 2019, Thoa won second prize for the Start-up and Innovative Competition “Women and the future of the green economy” launched by the Ministry of Science and Technology and the Việt Nam Women’s Union.

Their biggest achievement was teaching people to classify waste at source – one of the key problems in handling urban waste, which helped reduce waste treatment costs and increased efficiency at waste treatment facilities, according to Thoa.

Challenges remain but Thoa said she could foresee the long-term impact of the project was to gradually raise public awareness and change their habits for a greener Việt Nam. — VNS

Vietnamese products have entered over 200 markets around the world including markets with strict import regulations and standards such as the EU, Japan, South Korea and the US, according to a recent report released by the Ministry of Industry and Trade.

Buoyed by a strong economy and excited by international prospects, Vietnamese businesses are anticipating a very bright future, according to the latest survey from HSBC.

Textile and garments likely to hit $40b in exports this…

HÀ NỘI — Việt Nam’s textile and garment industry was likely to reach its target of US$40 billion in export turnover this year despite facing difficulties in some markets.

Building the correct legal framework is one of the major challenges holding back start-up businesses and now the government is looking at easing red-tape and giving an easier ride to both young companies and the private sector.

Booking for hotels and purchase bus/train tickets via Sacombank Pay…

Sacombank has added a new feature to its Sacombank Pay app: hotel booking and purchase of bus and train tickets.