Generations of Kiêm’s family in Vị Xuyên District’s Cao Bồ Commune have made a living by processing and selling tea for years.

“As a special gift from nature, we have processed and sold tea to earn a living, from generation to generation,” he said.

“I have joined training courses held by local authorities on farming techniques and doing business to develop our business,” Kiêm said.

“While doing business with others, I learned how they had successfully used Facebook and Zalo to sell their products,” he said.

Joining these social platforms, the young man made friends with people from different localities which created chances for him to introduce his tea products to a wide range of customers.

“I usually post photos about ancient tea trees and tea fields of Hà Giang as well as traditional tea processing steps and tea products, which gradually drew attention from people. Then some people started to text me to ask about my products and I received the first orders via those platforms,” he said.

However, the online business was not as easy as he had imagined.

“At first, not so many people believed in the quality of the products I introduced on my social platforms. The images were not enough. And I got no orders for the first several months,” he said.

“Then I decided to send samples of my tea products for them to try. And gradually, more and more customers came to me,” he added.

“The business has started to work effectively but more needs to be done to expand it,” he said.

Challenges remain, particularly his lack of experience in processing different kinds of tea to make diverse products and meet consumer demand, according to Kiêm.

He was reminded of years before when most local farmers sold raw materials to traders, including those from China, with low price, due to limited knowledge about tea processing.

To help tackle such issues, Kiêm has formed a co-operative of young local farmers to share experience and support each other. The group has drawn 10 households in the village, most of them poor families.

“We share experience in tea processing and expanding markets and find ways to improve the products’ quality,” he said.

They have also participated in training classes hosted by local authorities and engaged in organic farming to raise tea quality.

Local farmers previously didn't consider tea trees as major farm produce so they paid little attention to the trees’ quality, according to Hưng.

But they have gradually changed to organic farming and tea growth and production has become a key source of income for many ethnic minority households in the commune, he said.

Kiêm said: “We knew nothing about expanding markets and had no understanding of organic farming before so the tea production and price were so low.”

“But now the tea quality has improved with more diverse products, it also means tea price has increased and is more stable,” he said.

Chairman Hưng said: “Cao Bồ Commune has become a favourite tea production area of customers not only in Việt Nam but also from other countries. There are times we can't meet export demand.”

The commune exports nearly 200 tonnes of organic tea products to many countries each year, mostly in Europe and America.

Endowed with good conditions for tea production, Hà Giang has identified tea as a way to help local ethnic minorities improve their livelihoods.

The province is the third largest tea-growing area in Việt Nam, with 20,000ha of tea with an annual output of over 73,000 tonnes of tea buds per year. Of which, more than 9,000ha is certified to meet VietGAP and organic standards. 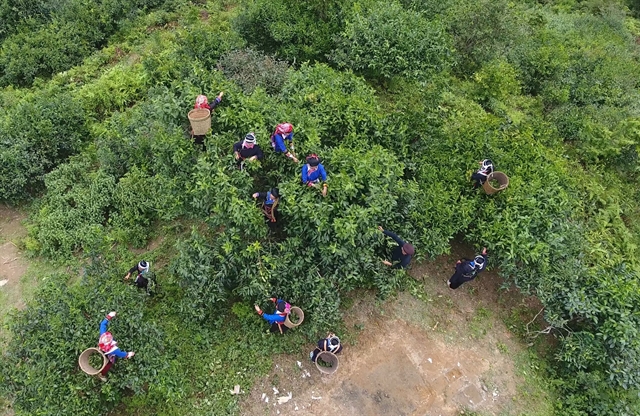 And with the determination and efforts of both local authorities and farmers, tea production has made many once poor ethnic farmers in the province successful businessmen like Kiêm.

His tea products are not only sold to customers in Việt Nam but also those from other countries like China, Laos and Russia. Kiêm has exported dozens of tonnes of organic tea products and has provided for his family.

They had never thought of escaping poverty, not to mention earning a mint from the tea trees.

Kiêm said doing online business and organic farming were all new, but it was worth learning and trying. — VNS

Hoan My Medical Group has been named the Viet Nam Hospital of the Year at the 2019 Frost & Sullivan Asia-Pacific Best Practices Awards in Singapore.

The PAN Group (HOSE: PAN) has just announced its acquisition of a nearly 80 per cent stake in the Shin Ca phe chain. Nguyen Duy Khanh, a member of the BOD of The PAN Group directly in charge of the investment in this start-up, shares his views on PAN’s production and trading of speciality coffee.

Vietjet leader receives Asia-Pacific CEO of The Year award in…

Vietjet President and CEO Nguyen Thi Phuong Thao has been named as the APAC CEO of the Year during an awards ceremony in Hong Kong on Tuesday.

A real estate exhibition, Novaland Expo, will take place in HCM City from December 4 to 8 this year.

HDBank pre-tax profit up record 51 per cent in third…

The HCM City Development Joint Stock Commercial Bank (HDBank, HOSE: HDB) has reported impressive results in the third quarter of the year, with pre-tax profits increasing by a record 51 per cent year-on-year to over VND1.23 trillion (US$53.4 million).